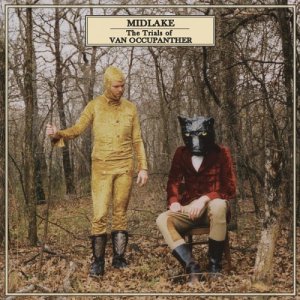 The Trials of Van Occupanther
Midlake
Nominated by Nia Potter

It’s about his struggle to go home, I think.

‘Oh no, I’ve stumbled, was I going too fast?
Some get angry, some of them laugh’

And it was long time ago, as suggested in Roscoe, the stand out radio-friendly opening track.

Is he going through the woods on the unsettling album cover? Is Van the guy in the yellow onesie, or the bloke sitting down with a bin bag over his head?

There are Bandits, My Young Bride, Branches, a camp, a hillside and Van the man looks up at his lost wife from several viewpoints. And there’s some deer, in the odd Chasing after Deer, which is superficially about chasing deer over a cliff (a sad image, well created) but probably more meaningful. Is it all about something I wonder, or not very much?

It’s guitars and folk and then suddenly gets more upbeat and groovy in It Covers the Hillside, as though he’s decided to come out of the trees for a beer in the late 70s. (Ok, it made me think of the Hart to Hart theme music …  a confabulation along the lines of the Neil Young/Kermit incident and hard to shift once it’s crossed my mind. That’s the power of music.)

Fleetwood Mac seem to be the biggest influence musically, though I’m sure there’s all sorts in there. Good melodies, pleasing vocals – I found it a nice listen… if I didn’t listen too closely.