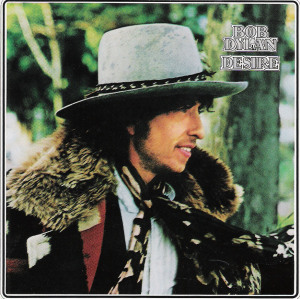 My first contact with Bob Dylan was when I scratched my Dad’s copy of Blood on the Tracks. It was 1975, I was four. How did I know I’d ruined a masterpiece?

I’ve listened to bits of Bob since but today was my first encounter with Desire, his 17th album, from the following year. The biggest song? Hurricane – which I did recognise – a powering protest song about the wrongful imprisonment of boxer Rubin ‘Hurricane’ Carter that made me angry, as it should.

But it’s also a good example of what is great about this album, which is the instruments and the orchestration. Forget The Times They are a Changin’ acoustics, this is bouzouki, accordion, mandolin, violin, congas, piano, all layered tracks and crescendos.

And the beautiful women singers Emmylou Harris and Ronee Blakley do much more than accompany, especially Emmylou on my favourite track, One More Cup of Coffee.

There’s a flavour of Mexico too, with Spanish guitar alongside the harmonica. He’s gone a bit cowboy. Dylan’s having fun. He’s sharing, and the collaborations pay off.

1 thought on “Review 1: One more cup of coffee for the road”